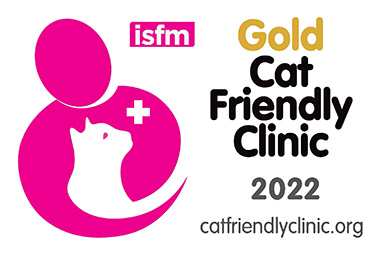 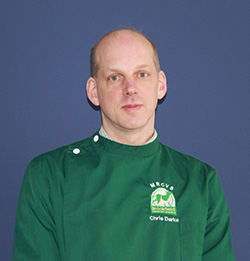 Chris qualified from Cambridge University in 1995. Chris began working at Brookfield in 2004, became a partner in 2005 and now co-owns the practice with his wife Victoria. Chris is an Advanced General Practitioner with a Certificate in Diagnostic Imaging which includes ultrasonography & radiology (x-rays). He also offers in depth consultations for dermatology and canine behaviour. Chris spends a lot of time managing the day to day running of the practice. You may also spot Chris running when he’s out training for a marathon or two ! 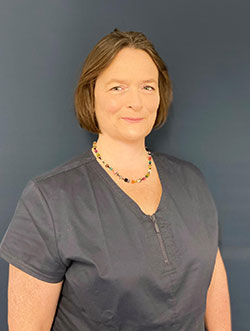 Victoria is Herefordshire born & bred and qualified from Royal Veterinary College London in 1996. Victoria began working at Brookfield in 2004 and now co-owns the practice with her husband Chris. Victoria enjoys surgery. She also has a particular interest in veterinary dentistry. In 2015 she introduced digital dental radiography and has taken our dental care to new heights. The start of 2020 saw Victoria start her certificate in veterinary dentistry by like most things that was part postponed & part converted to remote learning, due to COVID19. We were all very pleased when in August 2021 she received the news she had passed all parts of the certificate. As well as four sons at home, Chris and Victoria have a ginger cat Hugo, plus two Labradors Derek & Woody that they individually rescued in 2013. 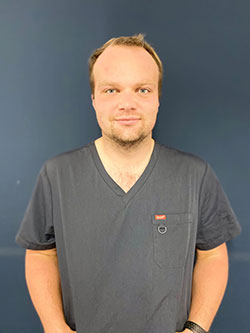 Charles has been working with Brookfield Vets since he qualified, starting with us in August 2016. Charles now shares his time between both our branches, tending to spend one day a week in Ledbury and the rest of his time in Hereford. In his time off Charles enjoys renovating his first home in the centre of Hereford, and walks with Dora, his Norfolk love! Daisy joined the Brookie team in 2021, 2 days a week in Hereford. Having qualified from Edinburgh in 2001 she has worked in a number of practices in Warwickshire, Worcestershire and Northumberland. She enjoys all aspects of small animal practice but has a special interest in small animal surgery and is currently studying for her Advanced Veterinary Practitioner Certificate. She is also a Veterinary Acupuncturist.

Lucy was an experienced receptionist who always had a smile on her face. We were very pleased to be able to appoint her as Practice Manager in 2016. She has contributed to many of Brookfield’s achievements, including becoming a Cat Friendly Practice and setting up a branch in Ledbury. This year she completed a qualification in Leadership and Management.
Lucy has a soft spot for cats which sees her having two of her own – Esme and Phoebe. Lucy obtained Phoebe when she was brought into Brookfield as a stray kitten involved in an RTA, she made a full recovery and now rules the roost. Lottie joined Brookfield in 2010 and started her Veterinary Nurse training while going to Abbeydale Vetlink College one day a week. Lottie qualified as a Registered Veterinary Nurse in 2013 and since then has had a keen interest in emergency nursing and critical care, she was awarded her Nursing Certificate in Emergency and Critical Care in March 2018. As well as getting stuck in with emergencies you will find Lottie spending a lot of her time organising and running Puppy School and currently studying for the Nursing Certificate in Animal Behaviour. Lottie was appointed Head Nurse in 2016 which involves working closely with the Vets and Nurses to help give our patients the best possible care during their stay.

Not one to sit still, she completed her Certificate in Animal Behaviour in Jan 2020. 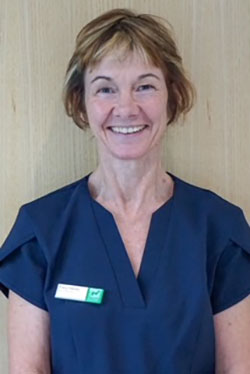 Tracy started her veterinary nursing career within a mixed practice in Hertfordshire qualifying as a RVN in 1997. She subsequently went on to train and qualify as a clinical coach in 2000. Tracy spent 12 years within small animal and mixed practice before moving to Newmarket to embark on her equine nurse training where she qualified from Hartpury in 2006. Tracy and her husband Colin then moved back to Colin's home county where Tracy took up an EVN post at a local equine referral hospital moving into a senior position.

She joined our Ledbury branch in 2019 and spreads her role across nursing, reception & administrative duties. In 2021 she took on the role of Branch Manager which will include overseeing the move to our new premises. Exciting times!

During her spare time she loves to ride and one day event her pony Little Blue Paint Works with support of her husband and Banjo their border terrier. They also love to walk the Malvern Hills. 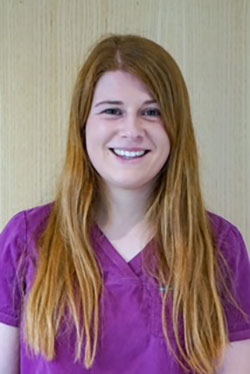 Nikki qualified as a Veterinary Nurse in 2018 from Abbeydale Veterinary College after studying for her Veterinary Nurse Diploma for 2 years at Brookfield. Since qualifying Nikki has started doing nurse consultations, she enjoys weight clinics and meeting new puppies and kittens.

Nikki has recently completed a dental oral care course aswell as her ISFM Cat Friendly Nurse Course. She moved across to become an extra member of the expanding Ledbury team in December 2020

Nikki has two dogs of her own, Shadow, a working sprocker spaniel and Roo a fox red Labrador. In her spare time, Nikki enjoys going to agility with Roo and walking the dogs.

Katie began her veterinary nursing journey with a Saturday Job at a local practice whilst still at school. She then went on to complete a National Diploma in Animal Management at Hartpury college in 2008.

She returned to veterinary in a local practice in 2011 where She undertook her veterinary nurse training with release to Abbeydale Veterinary College finishing in 2017. Katie enjoys all aspects of nursing and the variety it entails.

In her spare time she’s a mum to Jack and we’re very lucky she has a big interest in baking. She also enjoys walking and cycling around our beautiful countryside and helping on her brother's farm with their Hereford cattle and various breeds of sheep. James joined Brookfield in September 2020 to aid the vets during consults while owners are socially distancing outside the consult rooms. In May 2021 he moved to be an additional colleague in the Ledbury team. March 2022 saw him start his Student Vet Nurse career enrolling at Abbeydale Vetlink so now he's in green & white stripes 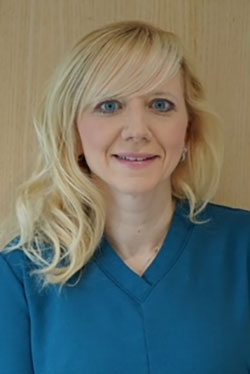 Tracey completed her Animal Care Level 1 & 2 at Holme Lacy College In 1996, alongside a placement at Brookfield for 6 months doing voluntary work.  Shortly afterwards she was employed at The Argus Veterinary Surgery in Ledbury, where she worked for the next 19 years!

When Brookfield took over the Argus Veterinary Surgery in Nov 2016, Tracey continued her role as veterinary nursing assistant and is based at our Ledbury branch.

Tracey completed her Level 2 Certificate in Anaesthesia in 2017, and more recently her ISFM Cat Friendly Handling course, Cat Friendly Receptionist Certificate and BVRA receptionist award levels; Bronze and Silver. She hopes to complete her BVRA Gold award in the near future. 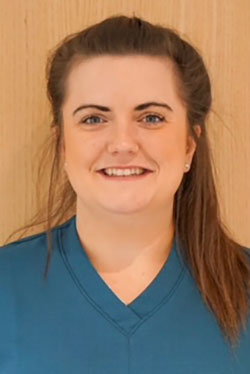 Tara started her animal care journey with a diploma at Hartpury after leaving school. She then completed her first year of VN diploma at Abbeydale college. Tara has since managed agriculture retail stores, including being an agri specialist in a local feed store. Plus Tara breeds (and hopefully shows) her flock of pedigree texel sheep alongside son Oliver, who keeps her busy as well as springer spaniel Ruby, who enjoys a good run around up on The Malvern’s.

"We are so incredibly grateful for the amazing efforts made by Holly and Rachel to save Jabulani’s life, even when things weren’t looking too good. We can’t thank you enough for all you did. Jabu is back home and back to his usual self if somewhat worn out from the whole ordeal. We reckon you guys are the best vets ever! ..."

"So so grateful for everyone who has helped my house bunny Bugs over this bank holiday weekend. Thank you so much! ..."

"Brilliant on line booking system - so easy to use with immediate confirmation and auto set up in your calendar. Well done Brookfield ..."

"We cant thank you enough for what you did for Max, we didn’t think he was coming home ..."

"We have always received excellent care from all, from receptionists to nurses to vets ..."

"I would like to say a very big thank you to Chris and all the other kind people who helped look after our little girl Tinkerbell. Thanks Chris for making it possible that she was with us 14 and ½ years even with all her problems. Also thank you for all the care and kindness you showed her and us downstairs ..."

"Thank you so much for looking after Rufus so well in these last few weeks. You’ve saved his life now TWICE and given him a lovely home from home during his recovery ..."

"I just wanted to put down in writing how very grateful I am for everything you did for Jasper and for me. You will never know what it meant for me to have your care and support, especially over these last few months when I knew my time with my special boy was coming to an end; to you it may just be job but to me I will never forget it and class you all a special people for it ..."

"Through your professional and wonderful care, I am still here! Simply thank you. My special thanks to Chris and Victoria for taking prompt action to save my life ..."

"Many thanks for all your efforts when treating and caring for Elle. There is no doubt that without your advice and persistence she would not be with us today. There were times when we probably would have thrown in the towel if it hadn’t been for you wanting to go that extra mile ..."

"I know from previous experience with a Dalmatian and a cat, that this is the surgery that I would always choose for a pet of mine. But Poko was special on so many levels and the care you gave him so that he lived a long and happy life was exceptional. He was certainly a dog with more than 9 lives! Thank you so much for everything you did for him and for the support you have always given me ..."

"Thank you so much for all your kindness and care to Lola and myself over the years. She trusted you and loved you all and I appreciated your consideration to me ..."

"Thank you so much for your support and understanding in my decision, your generosity for last night and your friendship over the years ..."

"Thank you for all you did to aid George in his recovery. You really went over and beyond in your care and professionalism in bringing George back to good health ..."

"Thank you for all your love and care for Digby over the years. He couldn’t have been in better hands ..."

"My sincere and grateful thanks for all your hard work and persistent endeavours through out Henry’s recovery ..."

We have placed a Google Analytics cookie on your device to help improve our service. You can learn about this and how to stop cookies being stored in your browser by reading our Cookies Policy. By continuing to use our site, you are accepting this Policy.